These beers are never gone for long

We're proud of our line-up of staple brews, which are almost always on tap, unless our infamous beer-sippers have cleaned out the keg. Even then, it won't be long until they're brewed again! If you are traveling to drink a specific beer on this list (here's looking at you, Coffee Porter lovers), please don't hesitate to give us a call at the taproom to double check your favorite brew is here.
​
Razzu! Raspberry Wheat
​OG: 1042 ABV: 5.2% IBU: 5
Light and crisp, this unique ale utilizes a touch of wheat and nearly one hundred pounds of real Oregon raspberries for a tart, refreshing fruit beer. “Razzu” is a highly local term meaning exceptional or superior. This beer is a favorite of teachers, loggers, and light-beer enthusiasts everywhere. 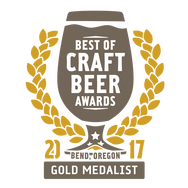 Otter Water Session Pale Ale
OG: 1040 ABV: 4.5% IBU: 25
Our session pale ale is perfect for those hot days when floating on your back in a Montana river sounds like the best way to spend an afternoon. Otter Water is an extra-pale, extra-refreshing session pale ale that delivers crisp citrus hop flavor without the bitterness of an IPA or traditional pale. Low alcohol and high quaffability will let you have an afternoon beverage without needing a nap.

Algonquin “Gonk” Amber
OG: 1054 ABV: 5.8% IBU: 30
This amber ale is modeled after the Alt (old) beers of northern Germany. Simultaneously rich and crisp, this beer exhibits strong caramel malt flavors without being sweet or cloying. This delicate balance is achieved though the careful use of Sterling and Willamette hops for an earthy, herbal character. We use the Hefeweizen yeast for this beer, but ferment it cold to enhance the lager-like character. The Algonquin mine was one of the first major silver lodes in the area, and later produced manganese to support both world war efforts.
​Montana 1 IPA
ABV: 6.6% IBU: 66
Where we live, it's easy to be late to the party...just like our latest release set to come out in 4-packs!  We created this brew with an approchable ABV and flavor profile for the style using Amarillo, Mosaic & Chinook hops to give it a juicy, citrusy, tropical blast. Montana 1 is named for scenic Highway 1 which connects Philipsburg to the world. Take a winding journey through juicy hops and remember: getting there is half the fun!
​​
Tramway Rye PA
OG: 1062 ABV: 6.4% IBU: 75
Tramway is our take on a Northwest India Pale Ale: bold, hoppy, and strong. We give the traditional recipe a tweak, though, and use malted Rye from Oregon to impart a subtle, complex spiciness that interacts well with the blend of Cascade, Centennial, and Chinook hops we use for flavoring and aroma. The citrus blast you receive when you dip your sniffer into the glass comes from dry-hopping the serving tank with whole-leaf Chinook hops. The original Tramway was constructed in 1889 (one year after the completion of the Sayrs building that now houses the brewery) to haul ore from Granite to the Bi-Metallic Mill. It was 9750 feet long, the largest in the country at that time.
​
Philipsburg Brewing Company